Skip to content
Why Jews Put Stones on Graves

Why Are Stones Placed On Jewish Graves? 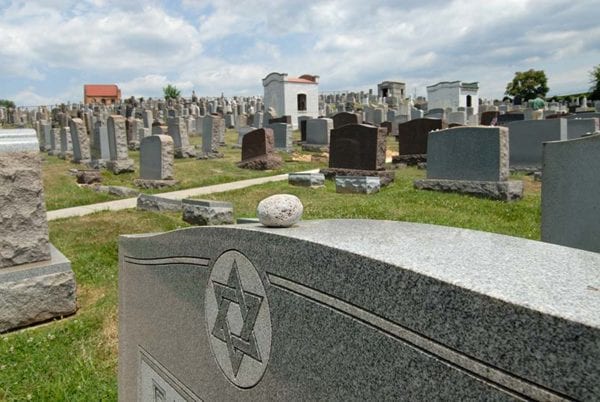 Jewish headstones come with a rich history behind them. Today, we use headstones to mark the gravesite of our loved ones. This is a way to not only help mourners visit the site later, but also as a way to memorialize and honor the deceased.

So Rachel died, and she was buried on the road to Ephrath, which is Bethlehem. And Jacob erected a monument on her grave; that is the tombstone of Rachel until this day.

Therefore, headstones have biblical roots and over time became a standard practice for honoring our deceased loved ones. The style and shape of the matzevah can vary and is up to the deceased’s family to choose a style that they believe will best honor the person. However, cemeteries may have certain guidelines for style and size to help keep all the headstones in the cemetery similar to one another in an effort to show that we are all equal in death.

The unveiling ceremony is a common custom in Jewish communities to formally consecrate the headstone and to honor your loved one’s life. This short ceremony involves covering the headstone with a piece of cloth before guests arrive and then removing it just before the Kaddish is recited for the ceremony. Following the ceremony, many people place stones or pebbles on the monument, which is a practice carried over from ancient times.

You may be wondering why we place headstones on gravesites. This is an ancient practice, but the exact origins are still debated. One of the most popular theories is that headstones were used as a warning to the kohanim in the days of the Temple. This act was considered a mitzvah, as a kohen became ritually impure if he came within four feet of a corpse. Therefore, upon burial, people would mark the gravesite by erecting a pile of stones to show kohanim they should avoid the spot according to Jewish law. As others passed by, they would add a stone to the pile to help with stability and longevity of the grave marker. Today, we use larger headstones to mark gravesites of loved ones. However, many people still follow the tradition of leaving a small stone or pebble atop the grave marker.

Modern Jewish headstone inscriptions generally feature the person’s name, date of birth, and date of death in both English and Hebrew. Generally, they also feature Hebrew letters as an abbreviation for “here is buried” at the top, as well as “may his/her soul be bound up in the bond of eternal life,” at the bottom. Many relatives also choose to utilize a description of their close relationships, such as “son of,” “father of,” or “brother of,” followed by the relative’s name.

Our team can help you design a headstone that honors your loved one and celebrates their life and faith with beautiful inscriptions in both Hebrew and English. Call us today to start the design process.